Sesquicentennial – Another Opportunity to Demonize The South 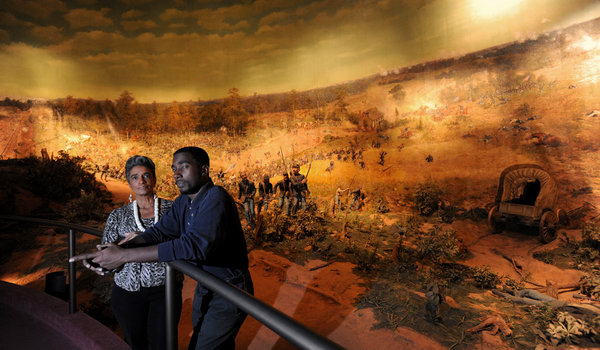 The Atlanta Cyclorama and Civil War Museum, which is being refurbished. Take a look at the facial expression. Care to guess how The South will be portrayed?

An article in the New York Times talks about the upcoming sesquicentennial events regarding the War for Southern Independence (of course, they incorrectly called it “the Civil War”). As if the demonization of Southern Whites since the election of Obama was not enough, we can count on even more of the same in the coming years commemorating the 150th anniversary of the War for Southern Independence.

Those who hate The South and all it stands for have but one weapon – the subject of slavery. They have none other. We have made a good faith effort to clearly and calmly explain the facts – both the good and the bad – about slavery, but it has made little or no difference. The South is still made into the whipping boy for all the racial problems in America.

It has long been my belief that we should simply refuse to engage in discussions about the topic of slavery with those who try to destroy Southern heritage. I have found that there is simply no way to make any progress in such discussions.  The typical belief is that The South is synonymous with slavery, and everything else hinges on that idea. Any attempt to get them to step outside their little box results in charges of “racist”. OK, enough is enough. I refuse to allow myself to be affected by that now-meaningless word. The Left has used that as their magic talisman to instantly silence their critics and claim moral superiority. They get away with it because we let them.

Our path is clear – we must continue to uphold the high standards of the Southern gentleman and treat everyone with respect and dignity – including our Southern ancestors and the heritage and culture that they represent. For far too long, we have mistakenly looked at treating “others” with respect and dignity as a one-way street and applied it only to those who mock and demonize us. Those “others” include our fellow Southerners, our families, our culture, our heritage, and our kinship.

We hold to The Definition of a Gentleman by Robert E. Lee:

“The forbearing use of power does not only form a touchstone, but the manner in which an individual enjoys certain advantages over others is a test of a true gentleman. The power which the strong have over the weak, the employer over the employed, the educated over the unlettered, the experienced over the confiding, even the clever over the silly — the forbearing or inoffensive use of all this power or authority, or a total abstinence from it when the case admits it, will show the gentleman in a plain light. The gentleman does not needlessly and unnecessarily remind an offender of a wrong he may have committed against him. He cannot only forgive, he can forget; and he strives for that nobleness of self and mildness of character which impart sufficient strength to let the past be but the past. A true man of honor feels humbled himself when he cannot help humbling others.”
Robert E. Lee

Treating everyone in the manner of a Southern gentleman does not mean closing our eyes to reality. It does not mean obsequious deference to those who mock all that we stand for. It simply means treating all others with respect and dignity. How they respond may determine the tone of future interaction, but the assumption is always that the other person is due a full measure of respect and dignity.

4 Responses to Sesquicentennial – Another Opportunity to Demonize The South