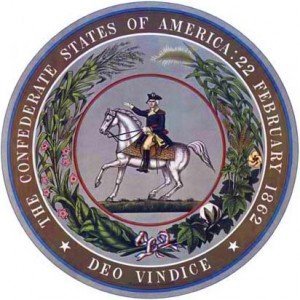 Today, of all days, is when the Confederate flag should be proudly on display. We fly a large 4′ x 6′ Confederate flag (the “standard” flag is 3′ x 5′) year-round at our home. Today is when we will replace the now-faded flag with a new one, and respectfully dispose of the old flag that has served so well. It will be neatly folded, placed on concrete paver, and burned. Cremation or burial are honorable ways of disposing of a flag that is no longer in presentable condition. If burning or burial cannot be done for some reason, another way of disposing of a tattered flag is neatly folding it, wrapping it in something, and then placing it in a trash container. It should never just be tossed in the trash as though it were just a scrap of cloth.

One Response to Confederate Independence Day – 150 Years of the CSA