A Gentleman is Prepared 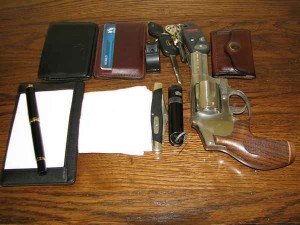 Preparedness also involves physical preparedness. “Every Day Carry” (EDC) is a common phrase among those who actively practice preparedness.

It used to be common practice for every man to always have a pocket knife in his pocket. It was carried to school, it was carried on commercial airliners, it was carried into the courthouse – everywhere. Somewhere along the way, pocket knives were demonized and became thought of as potential weapons rather than utilitarian tools. At one point in my life, I worked as a substitute teacher in the public schools. I was with some students when I needed to open a box. I pulled out my pocket knife, opened the box, and put it back into my pocket without even thinking about it. The look of horror on their faces and what they said told me that things had changed. It never occurred to me that it might be against the rules to carry a pocket knife. Had I been a student, I probably would have been expelled; had another adult seen it, I probably would have been fired and perhaps arrested. Life had changed. I still carry a pocket knife with me at all times, but there are now places where America’s Nanny State treats me as an irresponsible child who cannot be trusted with sharp objects; I avoid those places whenever possible.

Other items of Every Day Carry would include a clean handkerchief, a pen and something to write on, and the usual wallet, keys, and cell phone. Another item that is a part of being prepared is a small flashlight. With the advent of high quality LED flashlights, one can carry a very powerful flashlight in a very small package. Those using AA or Lithium 123 batteries each have their own advantages; I use both. Being someplace when the lights go out is a very helpless feeling. Don’t let that happen to you. I am amazed at the number of times during the day when I use my flashlight.

Those concerned with being prepared to defend yourself and your family would also add the means to effectively do so. In most cases, that means a handgun and some spare ammunition. Some, because of legal restrictions, would be limited to pepper spray or something similar.

We had a ritual when I was a Boy Scout. The leader would say, “Be Prepared”. We would all shout the reply, “We ARE Prepared!”

3 Responses to A Gentleman is Prepared