A Southern Gentleman is Friendly, Courteous, and Kind 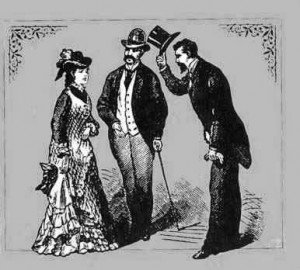 Friendly – Having the temper and disposition of a friend; kind; favorable; disposed to promote the good of another.
Courteous – Polite; wellbred; being of elegant manners; civil; obliging; condescending.
Kind – Disposed to do good to others, and to make them happy by granting their requests, supplying their wants or assisting them in distress; having tenderness or goodness of nature; benevolent…
— Websters Dictionary of 1828

For this post, I am combining three points of the Scout Law into one. Friendly, Courteous, and Kind are three sides of a triangle that makes society work smoothly. When any of those are missing, we all suffer.

So much of the world today seems to be coarse and cruel. We see videos posted on the internet showing gangs beating and humiliating an innocent person while the mob of thugs laughs and videos this cruelty as though it were a great spectator sport. Although it is currently almost exclusively a Black phenomenon, history has shown that Whites tend to follow the worst traits of Black culture. That makes it all of society’s problem – it is not just a Black problem such that we can smugly point our fingers at someone else. While Whites have little or no influence over Black culture, we do have influence over our own. The question is – will we exercise that influence in a powerful way to assure that our culture, at least, is friendly, courteous, and kind. We must become active role models. The best outcome would be for other cultures to see and emulate this so that their culture is taken to a higher, nobler level.

Our objective here at Confederate Colonel is to preserve and build up the culture of the Southern gentleman. While the most immediate benefit is to ourselves and our families and our circle of friends, it also benefits all of society. Ideally, others will observe, appreciate, and then follow the life pattern of the Southern gentleman. That is what makes a successful culture.

A few quotes on manners and etiquette:

Traditionally Southern statesmen have been orators. A society emphasizing social rituals and manners requires a kind of reverence for words to adequately express sentiment and feeling. The dregs of this rhetoric remain the stock in trade of the grass roots politicians. The Southerner generally does not shy away—to the extent the Northerner does—from a use of language that is something more than bare statement. The Northerner, with his conditioned respect for practicality and getting-to-the-point is more likely to possess a far greater reading than speaking vocabulary and to associate anything more than simple expression with ostentation.
William Van O’Conner 1947

Manners are of more importance than laws…. Manners are what vex or soothe, corrupt or purify, exalt or debase, barbarize or refine us, by a constant, steady, uniform, insensible operation, like that of the air we breathe in.
Edmund Burke 1796

Good manners are made up of petty sacrifices.
Ralph Waldo Wmerson 1876

I have always been of the mind that in a democracy manners are the only effective weapons against the bowie-knife.
James Russell Lowell 1873

5 Responses to A Southern Gentleman is Friendly, Courteous, and Kind