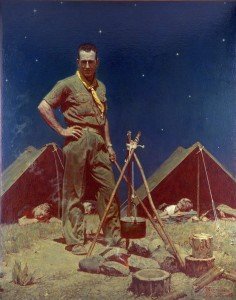 The Thinking Housewife had a post titled The Boy Scouts – R.I.P. It was about their decision to allow openly homosexual males into the organization as Scouts (though not as leaders – at least not yet). While the entire post was excellent, the final paragraph is what I want to focus on here:

The Boy Scouts is no more, but there are still boys. There are still vast woods and lots of sticks with which to build fires. There are still plenty of good men who want to introduce boys to manhood. One doesn’t need a corporate-funded super-organization to take a pack of boys into the woods and learn about survival. It’s time to begin anew.

I have titled this post “Boy Scouts Version 3.0″ to identify what comes next. I was fortunate enough to have been a Boy Scout during version 1.0 – before political correctness did what it always does and destroy the traditional culture. I was in Scouting in the early 1960’s. What we are seeing now is version 2.0, but it won’t be long before 2.0 will be so different from 1.0 as to be unrecognizable as the same organization. In time, the Boy Scouts will be much like a church that decides it is more important to please Man than to obey God. The good people begin to leave as the worldly people take over. The process accelerates until it becomes little more than a social club for nice people.

What happens to those who leave because Scouting has become what it was intended to protect boys and young men from? The Thinking Housewife is correct:
• There are still plenty of good men who want to help boys become men.
• There is no requirement for a massive organization and corporate sponsorship.

It is time for the Scouting equivalent of Home-schooling.