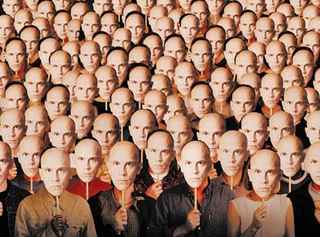 Egalitarianism is the false belief that everyone is equal – that everyone has equal abilities, equal potential, equal intelligence, equal moral and spiritual uprightness, etc. If everyone is equal, then the logic follows that the results should be equal – everyone should be equally wealthy, everyone should follow the same moral and spiritual codes, etc. Since, in the minds of the egalitarians, everyone is equal and should have the same resulting life, if results are not equal, then it must be because one group of people is taking unfair advantage of another group of people. Their answer? Government. Not just any government, but the kind of massive, intrusive government that would be required to force equality on everyone – the kind of government that America has become. Do you see where this is going? If you start out with a false premise, then everything that follows after it is also false.

Egalitarianism was the force behind the period of bloody anarchy known as the French Revolution. It was claimed as the cause for the Russian Revolution and the Chinese “Cultural Revolution” which resulted in the deaths of millions. Egalitarianism is the smilie face that Communism and Socialism hide behind. It is at the heart of the murders of thousands of White farmers in Africa and the resulting starvation when those once-productive farms are turned into wasteland by the “new owners”.

Egalitarianism is behind the “one man – one vote” system in America that has devolved into a situation where our leaders are chosen by those who are promised the biggest share of the loot taken from the rapidly shrinking pool of the productive.

Egalitarianism is a system where everyone is assumed to be completely equal, and thus have equal results. When equality produces unequal results, an egalitarian system reacts by trying to force equal results on unequal people. Since those of lower abilities cannot be force-fed greater abilities, the only option left to an egalitarian society is to place obstacles in the path of those with greater abilities. A classic example of this is “affirmative action” and other racial and gender preference programs. In each of these cases, any equalizing of results are due solely to penalizing one class of people to the benefit of another class of people.

Egalitarianism says that all cultures are equal. When people no longer recognize differences between cultures, they take the path of least resistance. They discard the self-discipline and responsibility that are the hallmarks of higher cultures and adopt the irresponsible, the crude, and the base. That is why we see Black culture spreading far outside that race. The pants-halfway-down look, the acceptance of “rap” as music, the acceptance of children out of wedlock, the  lack of respect toward women, the trashing of the English language (far beyond the normal slang of youth) – all of these have spread far beyond the Black race. The egalitarian claim is that when people are mixed (usually through coercion) the best from each group will prevail and be adopted by all. Just the opposite happens: just as churches that bring the world into the church become just like the world, people tend adopt the worst traits of others. There are notable exceptions, of course. There are those few who recognize superior cultures and adopt that culture in order to better themselves and their families. Those are very rare exceptions. People descend to the lowest common denominator when they accept the egalitarian lie.

Egalitarianism is at the very heart of communism – it is the equal sharing of misery. It is a system that discourages individual achievement. It punishes the high achiever and provides moral cover for the slothful. Why work hard to excel if the rewards of hard work and diligence and personal responsibility are taken away and given to others?

One of the major cultural differences between North and South in the years leading up to the War for Southern Independence was the egalitarian nature of Northern culture and the stratified nature of Southern culture. Radical egalitarians like Thaddeus Stevens and John Brown sought to tear down what they saw as the unfair social structure of the South. Southerners, on the other hand, had built a highly refined agrarian society that recognized social and economic standing as something to be sought after, and provided the opportunity to excel both socially and economically. True, advancement seldom came quickly – it might take a full generation or more. The culture of the Old South instilled patience and took a long term view of matters where the years it took to build a better life would be rewarded in the end. That end may be one’s children or grand children, but Southern culture was quite content with a slower pace.

The statement in our Declaration of Independence, “We hold these truths to be self-evident, that all men are created equal” was simply a rebuttal to the political theory of the divine right of kings that America was declaring her independence from. It was never intended as a literal statement about the nature of man. The radical egalitarians hijacked the phrase and used it as a powerful weapon in their war on the Western European culture that America was based on.

The only case where all men are truly equal is in the sight of God. In His eyes, we are all sinners in need of salvation through the blood of His Son, Jesus Christ. Other than that, no two people are equal, nor are any races or any other groups of people equal, and any system based on such a lie is doomed to failure.

19 Responses to Egalitarianism – Destroyer of Nations