The Proper Use of Authority 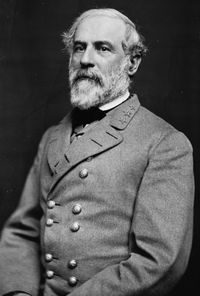 General Robert E. Lee certainly understood what it meant to have authority over others and how to use that authority properly.

Southern gentlemen are frequently found in positions of authority – and for good reason. The traits and character that makes one a Southern gentleman are the same traits and character that indicates that one has what it takes to handle authority well. At least that used to be the case. It now seems that men are placed in positions of authority not because they have the good character and judgement to do what is right, but because they will blindly follow orders without question – regardless of whether it is the right thing to do or not.

Understand that following legitimate orders issued by those in authority over you is also the mark of a Southern gentleman. Respect for authority is the cornerstone of a civilized society – respect for legitimate authority.

What brings this to mind is the way that National Park Service rangers have abused the authority vested in them during the 2013 government “shut down” by following political orders to make life miserable for the public they are supposed to serve. Did all NPS rangers act this way? No, I’m quite certain that was not the case. What I find troubling though, is that I have not seen any reports of rangers who stood up and said they will not be part of this. Would it be reported? Absolutely. Probably not by the major media, but the alternative media would have hailed such men as the courageous gentlemen that they would be. I saw no such reports.

That brings up the question of what is the proper way to handle illegitimate, immoral, or illegal orders? If you’re looking for a safe, easy, and painless answer, there is none. No one wants to lose their job – especially in a job market such as we have now. That is why it is so important to be selective when going to work for someone (including working for yourself) to make sure that you are working for someone who is of good moral character and will not require you to do that which you know is wrong.

What if you find yourself in such a situation anyway? As difficult as it is to say, a letter of resignation that clearly spells out the reason why you can no longer work for that employer is the only proper way to handle the matter of being issued immoral and/or illegal orders.

Before I get accused of being “holier than thou” and hearing “you don’t understand”, and “it’s obvious you’ve never been in that situation”, I’ll say, “Yes, I have been in that exact situation.” Did I follow my own advice here, and do the right thing and resign? Sadly, no, I did not. Instead I told the person over me that I knew exactly what he was doing and what he told me to sign my name to, and that this had better never happen again. Yes, I signed my name to something I knew to be false. I put my signature on a lie. That is something that I will live with for the rest of my life – always wishing that I had done the right thing. That, my fellow aspiring Southern gentlemen, is why I am writing this. It is written in the hope that others will not make the same error that I made decades ago. Learn from my mistakes.

4 Responses to The Proper Use of Authority