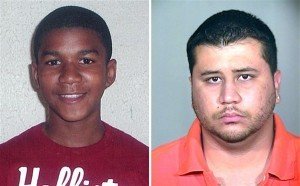 Photo from NBC News site with the clear intention of distorting the facts of the two men involved. The story was about the distortive effects of those photos.

On March 25, 2012, I wrote a post entitled Mob Rule in America – The Trayvon Martin Case, and have not mentioned it here since that time. With last night’s “Not Guilty” verdict for Mr. Zimmerman, now is the time for a follow-up.

Justice has been done. Anyone who actually listened to the trial rather than listening to the media (i.e., the propaganda branch of the government), knows perfectly well that a verdict of “Not Guilty” was the only just outcome. Given the powerful influences involved, I was highly doubtful that justice would really be served in this trial. I quite literally thank God that it was.

Justice does not “make things right”. One person is still dead and one person will never again lead a normal life, and given the number of death threats made against George Zimmerman, there is a real possibility that one of those will make good on the threat. It’s a bad situation all around and there is just no getting around that. Justice, however, has been done in that the case was tried according to the rule of law and decided on the facts and the evidence – not on emotions.

What happens next is really more important to the nation than the trial. The wide-spread concern about rioting by Blacks would never be an issue if the roles were reversed. Rioting by Whites just doesn’t happen in cases like this. The Black community has a real opportunity to prove that they have grown and matured, and that they can act in a civilized manner in a civilized country. They have the opportunity to prove the critics wrong. Obama and other Black leaders have the opportunity to show real leadership by admitting that their initial remarks did not serve to defuse the situation, but it must be defused now. The media has the opportunity to back off the rhetoric and the distortions.

Will they? The optimist in me certainly hopes so. The realist in me has serious doubts.